Wherein I am Quenched but not Nourished

Some things quench but do not nourish.
I've got nothing against it, it can be just the thing. I'm all for trying in trying times. And as we keep ourselves to ourselves, good, kind friends reach out and organize sing-a-longs, drink-a-longs, sew-a-longs. Irrespective of place, we can "gather" and goad each other into cheerfulness.
It's like being shown a piece of cake and asked to imagine eating it. It's like a facsimile of fun.
I'm not complaining, I'm very healthy, as are most of us and grateful for it, I can endure, as we all can, a bit of isolation. And walking fast with music in your ear is almost like dancing. Almost.
"Blah, blah, blah, you are sad. We ALL are." Well, as my sister used to say "Just because I have cancer doesn't mean your foot doesn't hurt". No one wins at the misery sweepstakes.

Since all sewing content is now mostly masks. I give you a backyard promenade, Muybridge style.

Ever Your Nimble Servant.
Miss Brilliantine

Posted by Miss Brilliantine at 1:51 PM No comments:

According to the internets this is my 100th post!
And as we all know, the internets are never wrong.
Well, well, one hundred. I can barely feel it, except maybe when it rains.

I've dusted off the old girl and replenished her supply of coal and whale oil for a cracking dive into actual sewing. I know! I found some tweed in the stash that I never thought I could wear in So Cal. but up here it's nice and temperate, for now. As I want to go a-travelling on a train in March, I though to cobble a suit from the stash. The red tweed was just enough for a skirt, I needed to find coordinating wool for a bodice. I tried all the usual places and found mostly coat weight wool, I even bought a yard which was much too dark and much too heavy (it makes a nice under-pad for the ironing board).  I thought I might have luck at a thrift store...and DID!

Someone had a red power suit in the 90's that will live again. I unpicked the skirt and used the panels for the front and sides, the jacket back became the center back and the sides came from the unpicked sleeves. The wool is a perfect light weight and a lovely deep red perfection.
There is just enough,  the sleeves will be in black velvet, a nice contrast.  I wanted to incorporate the red in the skirt somehow and since I only had scraps left, it needed to be an accessory with a bit of pop, I though of the dashing sabretache that Hussars wear.
With pants so tight where does one keep ones phone?
Pockets, the harbingers of civilization. Some say it was the button or beer, we may never know. 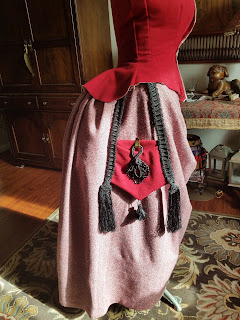 I'm calling it a Hussar pocket. Not a thing, don't do an exhaustive search and come a-quizzing. It's just barely period in that there was a vogue for pockets and some did suspend from the waist, other than that, lets stay friends and call it fanciful. It COULD have happened.

Since the tweed was so heavy I didn't flat line the skirt but made a cotton flannel petticoat to go under it with another thing I had in the stash that was too hot to use. Snugly. 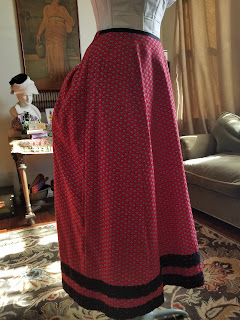 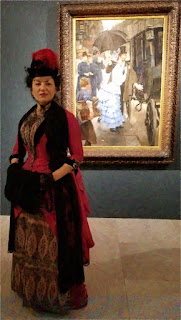 Make do and re-purpose, mend, tend, purge yourself of acquisitiveness. Sometimes, sometimes it's not so much possession as expression. Not so much wanting to HAVE a thing as wanting to make it. To pass your hands over it, drape and shape, mold it out of little cut-up pieces and give it dimension. Watch it as you turn one way then another and see it change. It's paper and ink, clay and dye, paint and pencils. Like new words.
I guess I was never made to be an Ascetic.
I can see it trimmed in black velvet for contrast. I love high contrast, and velvet...... scrummy. I have been holding off new purchases because I have bins full of stuffs. Plain and fancy, and I fancy this.

In The Mean Time-
I did re-make a few pieces to wear to The Great Dickens Christmas Fair, with practically perfect probity.  I do love the little puzzles of making do. 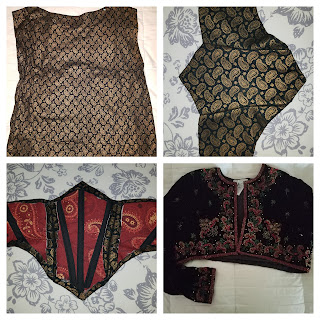 The Swiss belt was made from a soft printed suede "blouse", really it was 3 rectangles sewn together. I still have some left over to make another thing. The beaded bolero jacket was a lucky fine on Poshmark. I took a deep tuck all the way around to shorten it not wanting to cut it.


Maybe I'll buy a swatch of the brocade and just run my fingers over it... we'll see.

I Put the "Pro" in crastinator

I've been on a vision quest.
Well, mostly gin fueled and not so much about spiritual awakening as really thoughtful avoidance. So maybe vision quest is naming too nicely, lets say- "I see you hitherto loved hobby and I stuff you back into a sack."
I have nibbled around the edges, a cut out here and re-draft there. I had my scissors sharpened. I'm just waiting for 3 dress forms to visit me in the night, have an epiphany, and awake renewed.
Here are a few from the queue-
I plan on going to Veterans Day USO dance at the Presidio Officers' Club, Nov. 9. Times a-wasting.


Le Bal des Vampires is fast approaching and I want to freshen up an old dress with a newish bodice. It's so easy. Yup.

I have been connecting with NorCal colleagues, I DID go to a professional mixer in Oakland, the Directors Guild puts on the dog.


"No space of regret can make amends for one life's opportunity misused.''
Shut up Marley, I'll forge what I like.

Posted by Miss Brilliantine at 2:03 PM No comments:

In Which I go to a Thing and Craft On.


I packed my littlest basket (tisket-tasket) jumped in the jalopy and drove to San Jose for the Spirit of '45 Day at History Park, celebrating the 75th anniversary of D-Day. It was an excuse to see friends who do a great impression of the WI and Land Girls. The Civil Defense was also there showing youngsters how to properly use a bayonet-
life skills.
The Gatsby Summer Afternoon is fast approaching and I need to finish one of the many put aside projects, or pull the covers over my head, turn my face to the wall and submit to the failure of the back of the closet. My new house mate abetted my indecision by pulling out her suitcase full of vintage patterns. Which enthralled me as I love to decipher a vintage pattern as much as I love a jar of buttons. The precious.
I have boxes and boxes of vintage patterns, but these were new to me. Each one contained crumpled bits of tissue paper that look like scraps, but they reveal themselves with a bit of warm ironing, crazy rorschach shapes. I love the perforations, most are not printed, the easiest hieroglyphs ever.


This has been very good for my creative process, in that now I can dither with purpose. I have carefully copied a few onto sturdy pattern paper, but that aint sewing.
It's more like sewing visualization.

Posted by Miss Brilliantine at 4:39 PM No comments:

A Change is as Good as a Rest

So they say.
Here's to packing up all your old stuff (or almost all) and bringing it to a new place. It's still your stuff, even if the horizon is all new. Is one different or just the scenery, does it matter? It's change. Terrible, terrible change. And like me, all y'all have a lot of stuff, stuff of dreams, stuff of nightmares, stuffing to be kicked out of you and re-applied, like the Scarecrow in Oz. That's you all over.
The weird re-homing, like a lifelong Summer camp, a little home sick but happy. There will be crafts!

A funny thing, I kept on remembering little phrases my Dad and Sister used to say, tiny nostalgias that bubbled up, inconsequential and unbidden. Non sequiturs of encouragement that catch you unaware.

Time to sharpen my pencil, my scissors and my wits, for filling in the blanks and cutting up didos,
and for some "chaotic stumbling-about" as I find my footing.

The Swoop, the Curve, the Serpentine.

The hurly-burly of the to and fro.
Not any real time to sew anything deep, only slips of time. And if one needs a new corset, go to the professionals. It's my least favorite thing to sew, so, I found The Boudoir Key on the FaceBox and Etsy. The beautiful swoopy 1880's corset was just the thing, just the thing!
Do I have a nice length of pick coutil with roses woven in, sure do. But I would actually rather have an  actual corset.
Elizabeth was lovely and professional, she made mine one layer only, because California can be hot. 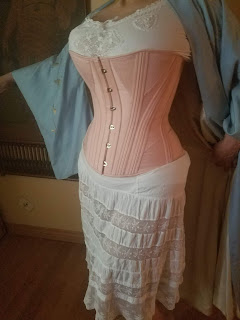 And Manet's "Nana", just because. 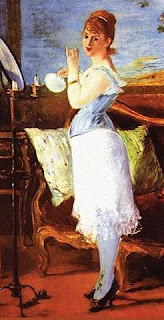 Posted by Miss Brilliantine at 7:17 PM No comments:

Miss Brilliantine
Look to the future, dress like the past. A semi annual (OK, so maybe a bit more) costume blog where if you are expecting hand sewing...look away now.